Every dog has his day. 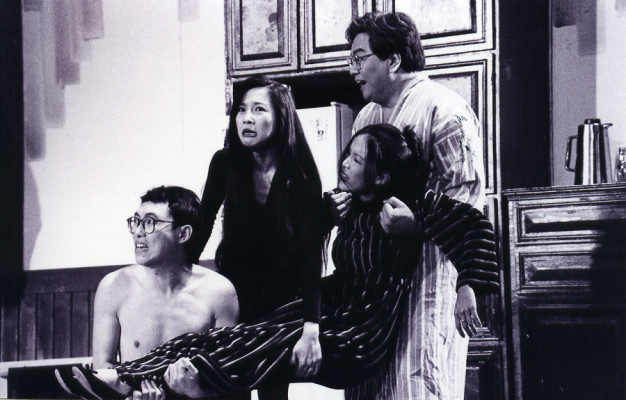 Tears and laughter. It has been that way in Taiwan since May 7, 1993, when Performance Workshop opened Kitchen Farce, a theatrical experience as poignant as chopping up an Onion. The quirky play, which toured the island for two months, debuted May 7 in Taipei's Cultural Center as part of the 1993 Taipei International Drama Festival. Kitchen Farce is an adaptation of British playwright Alan Ayckbourn's Absurd Person Singular, which has been staged 973 times in London and 592 times in New York since opening in 1972.

Lai, who did the adaptation, said Absurd Person Singular was chosen because it is an excellent theatrical work, and because it had never been staged before in a Chinese-speaking society. Like the original, the version by Taiwan's leading contemporary theatrical company focuses on the lives of three different couples during several Christmases. Lai, who adapted the play, changed the time span from three to 10 years and localized the social references. The couples' changes during the decade make a profound statement on the absurdities of life. Their leaps and plummets in social status represent the emergence of "the Taiwan-style upstart," said Chen Li-hua, who directed the play.

"There is great complexity in the play's technological side. It looks simple. But actually, it's more complicated than any other play I've been involved in," he said.

Performance Workshop's talented actors handle the difficult production admirably. The fun yet didactic play stirs the emotions in such a way that the audience cannot help but contemplate the nature of personal relationships and social problems.

"Perhaps our version even surpasses the original," Chen suggested.

Performance Workshop's stage design deserves as much praise as the skilled deportment of its actors. A long, narrow stage is used to pull the audience in close to the performers, enhancing the dramatic effect.

The story unfolds completely within the confines of the kitchens of the three families. All the set changes in the entertaining, thought-provoking play are executed merely by repositioning kitchen tables and chairs.

"It's just like playing a game of permutation," said director Chen.

The outstanding debut of Kitchen Farce adds another feather to the cap of Taiwan's Performance Workshop, a troupe already of some renown in Asia.

The troupe's productions are "evidence that Taiwan is creating the boldest Chinese art in Asia today," Newsweek reported.

Lai, the creative force behind the company, has been praised by the Japanese TV network NHK as Taiwan's "most brilliant theatrical light."

The 39-year-old artistic director won the ROC's National Arts Award in 1988 and was named one of the nation's Ten Outstanding Young Men in 1989.

This April, the Lai-directed film outclassed 44 other entries to receive the Calgary Prize in the Berlin Film Festival's non competitive Forum section. Peach Blossom Land is the first Chinese-language movie to win the prize in its seven-year existence.

Peach Blossom Land is based on Lai's successful play of the same name. Performance Workshop has staged the play in Taiwan, Hong Kong, Shanghai, Singapore and the United States.

Inspired through improvisation and refined in rehearsal, the finished plays are always powerful and full of energy and depth. Be they zany or grim – or both – the productions strive to improve society by illuminating social predicaments.

Besides Peach Blossom Land (1986), other original box-office hits by the company include The Night We Became Crosstalk Comedians (1985) and Strange Tales from Taiwan (1991). Among its foreign adaptations is a production of Arthur Miller's American classic, Death of a Salesman.