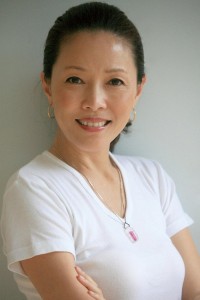 Ismene Ting was born in Hong Kong and grew up in Taiwan. A graduate of University of California, Berkeley, majoring in Comparative Literature, Ting is a renowned playwright, stage director and respected as one of the foremost actresses on the Chinese language stage. She has performed in Stan Lai's most famous play Secret Love in Peach Blossom Land (1991, 1999), Red Sky, I.Me.He.Him, A Dream Like A Dream, and Like Shadows, just to name a few.

In recent years, she has cooperated with Hong Kong veteran director Edward Lam and performed on stage in Hong Kong in Who's Calling Eileen Chang?, The Importance of Being Vulgar, The Happy Prince, and Eighteen Springs.

Her television credits include screenwriter and lead role in the sit-com Both Families Are Human.

Finding Shangri-La (2009) is Ting's first feature film, which received the awards for Best Cinematography at the 32nd Festival and Best New Actress at the Shanghai Film Festival (2010).

Ismene Ting also did some interesting work outside of theater which include Associate Director of 2009 Deaflympics Opening and Closing Ceremonies, Taipei, Taiwan.

Also that same year she wrote and directed a children's play titled The Adventures of Kawarkapo (a Tibetan god) which stars a group of kindergarten headmasters and was performed to underprivileged children throughout Taiwan.

Other recent original productions include 2010's Just Play It which is a very unique musical/drama based on a true story of the relationship between an American piano professor tutoring a blind Taiwan prodigy, starring the actual pianists themselves. The play received enormous accolades all over Taiwan and China, and has been running for the past four years and is currently still in production.

In 2012, Ismene Ting created and produced a unique theatrical work that brings dance and drama together in the poetic piece This is Real.

In 2013, Ismene Ting brought Dario Fo's political satire We Won't Pay! We Won't Pay! to China, which was an eye-opening experience for the Chinese audience because of its satirical content and outspoken bombast on government incompetence.

The Importance of Being Vulgar (2002)

Director of Nick Vujicic's “Never Give Up” Taiwan tour, 2011